A Tale of Two Rivers:

Paddling up the Nile on a Clyde-built steamer

As political turmoil persists in Egypt, it’s worth reflecting on the tranquility of the Nile. The mighty river was, and is, Egypt’s lifeblood. As the Greek historian Herodotus put it, 2,450 years ago, Egypt is the gift of the Nile. My hometown Glasgow is also associated with a great river, the Clyde. The Clyde has the grandest history of any river in terms of the wonderful ships that were built on its banks during the 19th and 20th centuries. Many of them were sent off to other lands, several went to Egypt and one of them still steams alongside the banks of the Nile.

Two hundred and one years ago, in August 1812, the world’s first commercially successful steamboat service began on the River Clyde. Henry Bell’s twin paddle ship Comet, named after the great comet of 1811, began transporting passengers between Glasgow and Greenock. Comet displaced 45 tons, but a 4hp steam engine could drive her along at 5 miles an hour into a headwind, something that was unthinkable on a sailing ship (NB: old non-metric units are quoted here as these ships were mostly built using them). A replica of Comet, newly renovated for the bicentennial anniversary at Ferguson’s Shipyard, can be seen in Port Glasgow today, and the wonderful PS Waverley maintains the tradition on the river itself, but there are Clyde-built paddle steamers still in service further a field, including one on the River Nile. 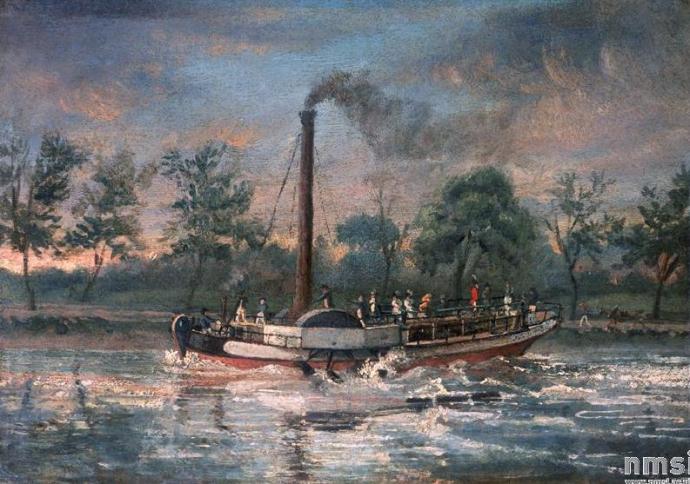 Painting of the ‘Comet’ courtesy of the National Museum of Scotland

In 1870 Thomas Cook and son established a mail and tourist service on the Nile when Egypt’s viceroy granted them a concession to run the steamer fleet between Cairo and Aswan. They proclaimed that “Ancient Egypt’s splendour, its glory, romance, magic and strange peoples, are best comprehended by voyaging on its placid, scenic water-way”.

In the same decade on banks of the River Clyde, William Bow and John McLachlan formed a new company at Abbotsinch near Renfrew, making steering gear and light marine steam engines for the Clyde shipyards. In 1900 the company expanded into the building of small ships by taking over J. McArthur and Co’s Thistle Works and shipyard near Paisley. They specialised in the fabrication of ‘knock down’ paddle steamers, something like a Clyde-built IKEA kit. Their dismantled ships were exported overseas as far a field as Lake Victoria and the rivers of Australia where they were re-assembled and put into service.

In 1884 Cook’s existing Nile fleet was requisitioned by Lord Kitchener for transporting troops, armaments and supplies south to Khartoum, to put down the Sudanese uprising that had led to General Gordon’s demise. The fleet was decimated by this action and ended up in an irrecoverable state. As a result, Cook commissioned several new paddle steamers, including the PS Sudan in 1921. The Sudan was the first of a new Sudan class fleet and was built by Bow and McLachlan in Paisley. The new ship, yard number 315, displaced 600 tons, was 300 feet in length, with a breadth of 32 feet and a shallow draft of 9.5 feet. The 500 hp engines were triple expansion type and the ship could carry up to 80 passengers. This larger class of vessel operated during the high season, while a smaller class, carrying 50 passengers, operated in low season. Sudan was sent to the Nile where she was put into service plying Cook’s routes.

Egypt regained its independence after the Second World War and the Cook fleet was requisitioned by the Egyptian government. The Sudan was operated as a royal steamer and tourist ship under the flag of Eastmar Nile Cruises. The proverbial functionality and reliability of Clyde-built ships, and the century of experience that her Clyde-side designers had building paddle steamers may go some way towards explaining how she survived her various roles and remained in service. ln 2004 she appeared briefly in the BBC’s Death on the Nile, a production of Agatha Christie’s 1937 novel starring David Suchet as Hercules Poirot. She was subsequently acquired by a French company who carried out an extensive restoration and refurbishment and she now operates as a tourist cruise ship with 23 luxury cabins. Each one has its own theme based on a historical character related to Egypt. Two suites recall the Scottish origins of this venerable ship. One is named after the Scottish artist of oriental and Egyptian scenes, David Roberts, another after the fashion designer and author of Letters from Egypt, Lady Duff Gordon, who survived the Titanic disaster along with her Scottish husband Lord Cosmo Duff-Gordon. Armchairs and shaded tables now line the deck-side walkways outside the luxurious Belle Époque styled cabins, providing vantage points from which passengers admire the wonderful monuments and natural landscapes of the Nile’s riverbanks.

One other Clyde-built paddle steamer still survives in Egypt, although in an un-restored state. The PS Ibis, a stern wheel paddle steamer built in 1886 at Fairfield’s yard in Govan specifically for the Nile military expeditions to Sudan is moored on the Nile near Cairo, ready for a generous benefactor to take under a wing.

In 2012 the Egyptian tourist minister announced that the Nile would be reopened for cruises between Cairo and Aswan for the first time in 18 years. The current situation is rather more turbulent, but once the long overdue political changes have been negotiated, just as a ship might negotiate the great cataracts of Aswan, it could be a good time to embark on a leisurely trip ‘doon the watter’ (as we say in Glasgow for our river) on the PS Sudan.